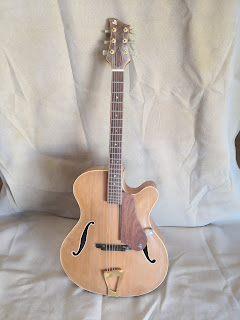 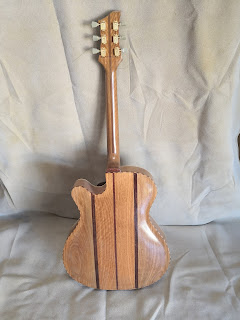 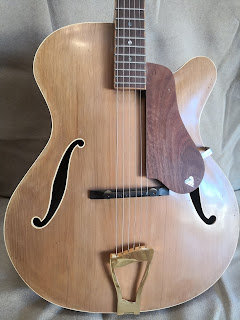 Posted by Brendon Foley Lutherie at 05:24 No comments:


Hello.  I thought I would begin by talking about instruments I have built in the past.  Later on I'll talk about what I am currently working on, but for now I'll focus on past achievements.  First I'll talk about one of the first mandolins I built:

This mandolin won me a prize at the 2005 Darlington Arts Festival, Highly Commended in the 3-d design category of the Open Art Exhibition.  It's a fairly simple design, flat top and back, with ladder bracing.  The neck fits to the body with a dovetail joint, the first time I'd tried a dovetail joint and it came out really well; the fit was like a glove and there were no visible gaps (not an easy thing to achieve with a hand-cut dovetail joint; I did it all with a small dovetail saw, files and chisels).  The soundboard is made of King Billy Pine, a Tasmanian timber that is no longer commercially harvested.  King Billy Pine has been highly regarded by Australian violin makers for over a century.  It imparts a sweet singing tone, is stable and easy to work.

King Billy Pine is becoming increasingly difficult to source and I have little in stock, but there are other soundboard woods that work just as well.  From memory, I sold this mandolin for $AU600.  If I was to make another of these I would use X-bracing for the top and back which I think would be better structurally, standing up better over time to the tension of the strings which, on a mandolin, can be considerable.  I'd also lose the slotted head-stock design which makes changing strings a pain.  Now I'd use a flat head-stock, which is what you see on the majority of Mandos.

More later...
Posted by Brendon Foley Lutherie at 08:51 No comments: