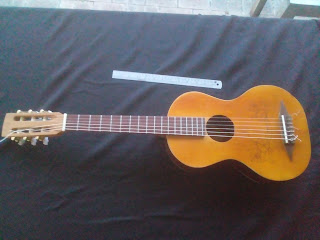 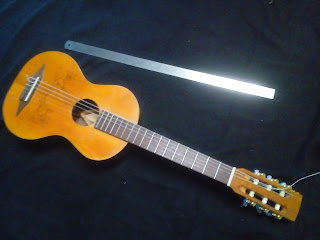 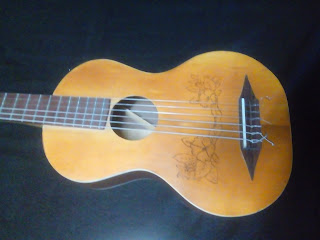 I've decided that number 37 is finished.  I'm not totally happy with it as there is still a slight buzz on the lower frets on the lower strings.  Oh well, better luck next time.  I've decided not to sell this guitar but to keep it as a personal instrument as I love the pyrography on the soundboard and can't bring myself to part with it.  The pyrography was done by a friend named Rhonda Schipper.  Very talented lady.  I finished it with not French Polish strictly speaking, but with a shellac/wax mixture I concocted myself.  The emulsion I came up with contains beeswax, carnauba wax, garnet shellac, grass tree resin, lemon oil and methylated spirits.  I wiped and buffed several layers of the mixture and it came out a nice semi-gloss after a cut and polish with fine abrasive.  Much easier than French Polish.  I collected the grass tree resin locally and plan to seek out some bushland and find some more resin.  Here's a couple of vids on collecting grass tree resin:

I bought a bottle of dissolved grass tree resin from Gilly Stepehnson many years ago and only used it recently.  It gave a nice color and it caused me to investigate the subject further.  I liked the idea of making a wood finish from locally collected ingredients.  I also began to investigate the subject of home-made varnish generally and began reading about traditional violin varnish.  From this I thought of making my own varnish from grass tree resin, gum sandarac, shellac, methylated spirits and maybe some other colorants such as cochineal.  This is still in the process of realization.  More on this soon.

Posted by Brendon Foley Lutherie at 03:01